According to Ian Rapoport, new Steelers DT Larry Ogunjobi‘s deal is worth up to $8 million for one year.

It’s a far cry from the $40+ million Ogunjobi signed for earlier this offseason but it does give him a chance to get healthy, rehab his value and take a stab at free agency again next offseason.

Adam Schefter reports that the Steelers have signed veteran DT Larry Ogunjobi to a one-year contract on Tuesday. 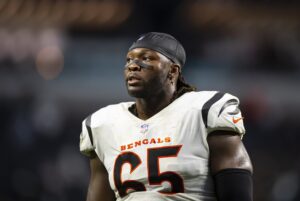 Ogunjobi visited with the Steelers today so it was clear that a deal could be reached at some point in the near future.

The veteran had a $40+ million deal voided with the Bears earlier this offseason due to a failed physical related to his surgically repaired foot. However, he should fill a big hole for the Steelers on the defensive line if he’s healthy.

He’s also visited with the Jets this offseason.