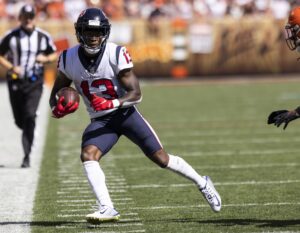 New England later picked up his fifth-year option for the 2018 season before trading him to the Rams for first- and sixth-round picks. From there, Cooks agreed to a five-year extension worth $81 million with Los Angeles only to be traded to the Texans last year.

Cooks is set to make base salaries of $2.5 million and $12.5 million over the next two seasons. His deal voids after the 2022 season, making him an unrestricted free agent in 2023.

In 2021, Cooks has appeared in 14 games for the Texans and caught 80 passes for 945 yards receiving and five touchdowns to go along with 21 yards rushing.