Aaron Wilson of the Houston Chronicle reports that Texans S Lonnie Ballentine dislocated his left knee during Sunday’s game and sustained “significant” damage to the ligaments in his knee.

Ballentine, 22, was taken in the seventh round of last year’s NFL draft. He managed to make the 53-man roster coming out of the preseason last year, but wund up being placed on season-ending injured reserve in August.

Ballentine’s 2015 season comes to an end with him appearing in two games and recording three tackles and a pass defense for Houston. 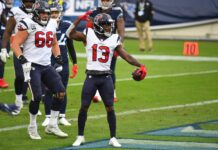