The Tennessee Titans officially activated DB Brady Breeze from the COVID-19 list on Thursday, but he remains on injured reserve, per Aaron Wilson. 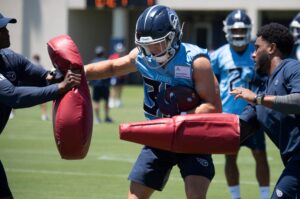 Breeze, 23, was selected in the sixth round of this year’s draft by the Titans. He signed a four-year, $3.6 million contract with Tennessee.

The Titans placed Breeze on injured reserve coming out of the preseason with an ankle injury before adding him to the COVID-19 list.