Jordan Schultz reports that CB Terrance Mitchell has been signed by the Titans off of the Patriots’ practice squad. 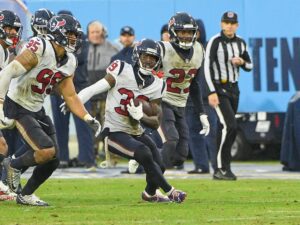 Mitchell, 29, is a former seventh-round pick of the Cowboys back in 2014. He lasted just a few months in Dallas before he was waived and later signed to the Bears practice squad.

Mitchell returned to the Cowboys in 2015 but was once again cut loose during the summer and later claimed by the Texans. Mitchell signed on with the Chiefs at the start of the 2016 season and spent the past two years in Kansas City.

The Browns signed Mitchell to a three-year, $12 million contract in 2018 and he later agreed to a two-year contract worth up to $7.5 million with the Texans in 2021. He was released after one season, though, and caught on with the Patriots on a one-year deal.

In 2021, Mitchell appeared in 14 games for the Texans and recorded 59 tackles, one interception, three forced fumbles, and 10 pass deflections.