According to Adam Schefter, the Titans and RB Derrick Henry now working to finalize a deal before today’s deadline. Schefter says a deal is “on way to being done.” 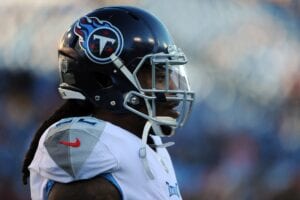 Henry was set to make $10.27 million fully guaranteed under the franchise tag this season.

Henry, 26, is a former second-round pick of the Titans back in 2016. He finished the final year of his four-year, $5.407 million rookie contract and was set to be an unrestricted free agent when the Titans franchised him.