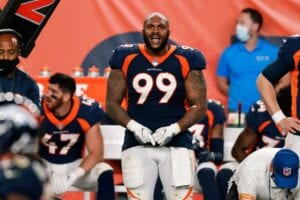 However, Beasley adds nothing is imminent between Casey and any team. Training camps will start leaguewide at the end of July and it’s possible Casey could wait until then to sign.

The Broncos cut Casey earlier this offseason to free up nearly $12 million in cap space after he missed nearly the entire 2020 season due to a biceps injury.

He’s been a free agent on the open market ever since.

Casey stood to make a base salary of $11.25 million for the 2020 season when he was traded to the Broncos for a seventh-round pick. Denver released him after one season.

In 2020, Casey appeared in three games for the Broncos and recorded 14 tackles, including one for a loss, no sacks and three pass defenses. Pro Football Focus had him rated as the No. 20 interior defensive lineman out of 119 qualifying players.