According to Field Yates, the 49ers brought in veteran STashaun Gipson for a workout on Thursday. 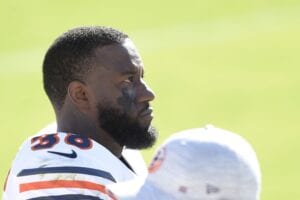 Gipson, 32, signed on with the Browns as an undrafted free agent out of Wyoming back in 2012. He returned to Cleveland on a one-year restricted tender with the Browns worth $2.356 million for the 2015 season before signing a five-year deal worth $35.5 million with the Jaguars in 2016.

However, the Jaguars released Gipson in 2018 and he later signed a three-year, $22 million deal with the Texans in 2019. Houston cut Gipson loose and he landed with the Bears on a one-year deal and re-signed to a one-year extension last offseason.

In 2021, Gipson appeared in 12 games and recorded 47 tackles, one tackle for loss, one sack, two interceptions, one fumble recovery, and three pass defenses.