Browns QB Baker Mayfield is taking his chemistry with WR Odell Beckham very seriously and is positive that the two will have a better connection during the upcoming season.

“It’s sure as hell going to be a lot better than last year,” Mayfield said via Pro Football Talk. “We’re just on the same page, things we talked about. There was a lot going on within the building last year. We’re not going to get into that, but we’re both in a better state. He’s healthy; surgery was successful, thank God. He’s feeling great. He’s in a great state of mind. You can tell how serious the offseason was for him. It just kind of permeates throughout the whole building.”

Ravens HC John Harbaugh praised S DeShon Elliott, who will be forced to step up following the departure of S Earl Thomas.

“He likes to talk,” Harbaugh said, via Jeff Zrebiec of The Athletic. “It’s a good thing most of the time. Sometimes you’ve got to tell him, ‘OK, I’ve heard enough.’ This guy is energetic, (an) all ball kind of guy. Great communicator on the field and also a great communicator off the field, too. That’s just who he is. I’m really pleased with that part of it.”

Elliott proclaimed that while he respects Thomas, he is worried about what he can bring to the Ravens and continuing to learn from fellow safety Chuck Clark.

“I respect Earl and his game, but I’m not worried about Earl,” Elliott said. “I’m worried about me and what I can bring to this team and my teammates. I didn’t know patience when I first came into the league. It was always go, go, go. I learned that from Chuck. I feel like being confident in your abilities, it comes from just being able to know that you’ve prepared the right way. I’ve been preparing as a starter for two years, so I know what I can do.”

Because of the way his tenure in Miami ended, the exact deployment the Steelers will use with S Minkah Fitzpatrick continues to be a hot-button topic. He played mostly free safety after being acquired midseason in 2019 but said this offseason he would be open to moving around to take advantage of his versatility as long as it played to his strengths — a distinction that was lost with what the Dolphins tried to do with him. Now the Steelers coaching staff says it wants to make sure Fitzpatrick’s strengths are maximized.

“We do move him around,” Steelers DB coach Tom Bradley said via Chris Adamski of the Pittsburgh Tribune-Review. “Formations are going to dictate a lot of different things we do with him. One of the things you always try to do in football is get your guys in the position that they do their best things. One of the things he does where he is really good is playing center field and being around the ball and doing all those things. We do have the capability to move him and put him in different spots. A lot of times formations will dictate that — motions, adjustments. But we would like to keep him in center field.” 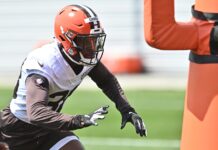 186,446FansLike
7,623FollowersFollow
275,845FollowersFollow
© NFLTradeRumors.co is an independent news source and has no affiliation with the National Football League (NFL), NFL.com, or any team(s).
wpDiscuz