Broncos DE Bradley Chubb said he is on track with his recovery from a torn ACL and will be “ready to go” for the 2020 season-opener.

“Yeah, no doubt, I feel like I’ll be ready to go,” Chubb said, via Ryan O’Halloran of the Denver Post.

Chubb mentioned that he hasn’t had any physical work against offensive linemen and that will be the next step with his rehab.

“We’re going to play it smart and just try and work back into it because, right now, I haven’t been doing anything physical like going against an offensive lineman,” said Chubb. “I feel like with my health, that’s going to be the next step for me, getting that whole confidence thing back and I feel like as we get into the flow of things, I’ll be good.”

Chubb feels he has a lot to prove in 2020 after appearing in just four games last season.

“I feel like this is a very what-have-you-done-for-me-(lately) league,” said Chubb. “My rookie year — that’s two years ago now. I have to come back with the same hunger I had, the same ‘dog’ mentality and go out and prove everybody right or wrong. If they’re writing I won’t be the same, proving them wrong. Or if they expect great things from me, proving them right. My main thing is to play football like Bradley Chubb knows how to play football and everything will take care of itself.”

Broncos QB Drew Lock pointed out the challenges of getting on the same page with his teammates after missing out on a full offseason program.

“Yes, we didn’t get enough time with each other and we’ll have a shortened period of time when we’ll have to pick up a lot of things extremely quickly and it may not be the prettiest at first,” said Lock. “But our job is to make the mistake, learn from it and try not to make that mistake more than once because you don’t have time to make the same mistakes.” 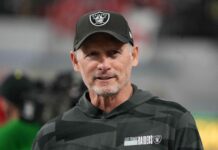