Colts QB Chad Kelly seemed on the verge of earning a shot to prove himself as an NFL quarterback with the Broncos. But an arrest for criminal trespassing was the final straw on a long list of transgressions for Kelly that earned him a ticket out of Denver. The Colts signed Kelly for what they were very clear was potentially his final chance in the NFL to rehab his image, and so far Kelly has been able to stay clean. Colts HC Frank Reich — who backed up Kelly’s uncle, Hall of Fame QB Jim Kelly, for nine seasons — said Kelly has been impressive both on and off the field while in Indianapolis.

“Chad Kelly off the field has been as good as anybody I’ve been around,” Reich said via the Buffalo News. “He’s been a 10 out of 10, off the field as well as on the field. I’m excited for him. . . . I cannot tell you how happy we are with Chad. He’s progressed a lot as a quarterback. He really works hard at it.”

Jaguars WR D.J. Chark broke out in his second season in the NFL. The lanky wideout snared 73 passes for 1,008 yards and eight touchdowns and new Jaguars OC Jay Gruden thinks he can top those numbers as the team’s No. 1 wideout, particularly if he gets more opportunities to exploit matchups from the slot.

“He is playing with a load of confidence right now; I think we can do a little more with him and get him inside and in the slot,” Gruden said via Ashlyn Sullivan of the Jaguars website. “He is hungry and wants to be great, he is going to have a very bright future.” 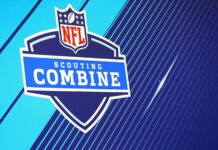