According to Adam Schefter, Saints RB Alvin Kamara‘s absence from training camp the past three days has been unexcused and is believed to be related to his contract. 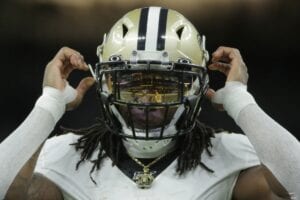 Kamara is entering the final year of his rookie deal in 2020 and looking for an extension from New Orleans that pays him near the top of the market for running backs.

The two sides had opened extension talks a couple of weeks ago and while no deal was considered imminent then, New Orleans’ initial offer had been considered solid.

Nick Underhill notes the two sides have drawn closer and it’s worth watching to see if they can get over the hump as the season is less than two weeks away.

It’s worth mentioning that the Saints will have their franchise tag available next year if they need to prevent Kamara from hitting the open market.