The Bears have waived LB Josh Woods on Monday, per Brad Biggs. 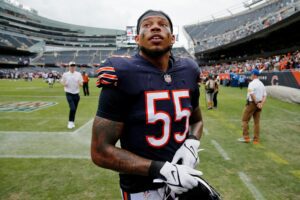 The move is to open up a roster spot for WR Breshad Perriman, who Chicago is signing to the roster.

Woods, 25, wound up going undrafted out of Maryland in 2018. He signed with the Bears following a tryout at rookie minicamp. However, he was waived coming out of the preseason and signed to the practice squad.

The Bears re-signed Woods to a futures deal for the 2019 season and he made the roster each of the past two seasons. The Bears had re-signed him to a one-year deal this past offseason.

In 2020, Woods appeared in 15 games for the Bears and recorded 12 total tackles and a fumble recovery.