The Buffalo Bills are hosting QB Chad Kelly and K Tristan Vizcaino for visits this week, according to Field Yates. 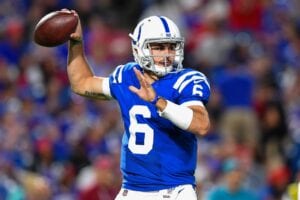 Yates adds that the Bills are essentially bringing the two players in as “quarantine options” in the case that they end up shorthanded during the AFC Championship Game.

The Colts waived Kelly coming out of training camp and later re-signed him to their practice squad before being cut loose a few weeks later. Kelly had recently tried out with the Bills earlier this month.

Browns Also Have LB Matt Milano On Their Radar