Bills LB Andre Smith has been suspended for the first six games of the 2022 season, according to Ian Rapoport. 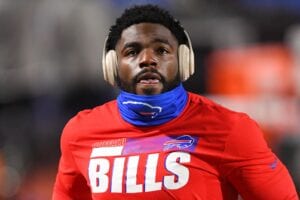 Smith, 25, was drafted in the seventh round by Carolina out of UNC in 2018. He was entering the third year of his four-year, $2.5 million deal when the Panthers traded him to the Bills in exchange for a conditional 2023 seventh-round pick.

Smith was on and off the Bills’ practice squad before agreeing to a two-year contract worth up to $3 million last year.

In 2021, Smith appeared in 15 games for the Bills and recorded four tackles, no sacks and a fumble recovery.