According to Aaron Wilson, the Bills brought in five wide receivers for workouts on Tuesday, including J’Mon Moore.

Moore, 24, is a former fourth-round pick by the Packers in the 2018 NFL Draft out of Missouri. He was set to enter the second year of his four-year, $2.9 million rookie contract when Green Bay cut him loose during final roster cuts.

Since becoming a free agent, the Chiefs brought Moore in for a workout earlier this month but left Kansas City without a contract.

In 2018, Moore appeared in 12 games for the Packers and recorded two receptions for 15 yards receiving (7.5 YPC) and no touchdowns. 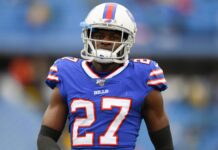