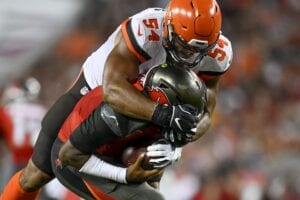 Vernon, 30, is a former third-round pick of the Dolphins back in 2012. He played out the final year of his rookie contract before the Dolphins used their transition tag on him.

However, Miami later decided to rescind the tag and Vernon went on to sign a five-year, $85 million contract from the Giants in 2016.

New York traded Vernon to Cleveland as a part of the deal involving WR Odell Beckham back in 2019. He will be an unrestricted free agent in 2021.

In 2020, Vernon appeared in 14 games for the Browns and recorded 36 tackles, nine sacks, one forced fumble, one recovery, a safety and three pass defenses. Pro Football Focus has him rated as the No. 21 edge rusher out of 115 qualifying players.