Adam Schefter reports that the Browns are signing QB Josh Rosen to a one-year contract on Thursday. 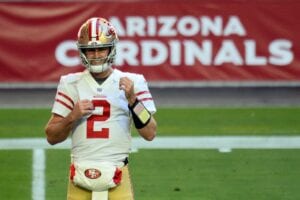 Rosen was among a group of players who tried out for the Browns earlier in the day.

With Deshaun Watson facing a potential suspension from the league, much has been made about the Browns’ depth at quarterback.

Jacoby Brissett is in line to start should Watson miss time, which means Rosen will likely compete with Joshua Dobbs for playing time during training camp.

Rosen, 25, is a former first-round pick of the Cardinals back in 2018. Arizona traded him to the Dolphins for a second-round pick after just a year during the 2019 NFL Draft.

Rosen was entering the third year of his four-year, $17,664,284 contract and set to make base salaries of $660,000 and $750,000 over the next two years of the agreement. The contract included a fifth-year option for the Dolphins to pick up in 2021. However, the Dolphins waived him coming out of camp.

Rosen went unclaimed on waivers and later signed on to the Buccaneers’ practice squad. San Francisco signed him off Tampa Bay’s practice squad late in the season and brought him back on a one-year deal last February. He was waived during camp and signed by the Falcons.

In 2021, Rosen appeared in four games for the Falcons and completed two of 11 passes for 19 yards and two interceptions.