According to Ian Rapoport, the Colts have signed LB Darius Leonard to a five-year extension worth $99.25 million. 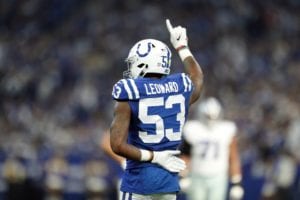 Rapoport adds Leonard receives $52.5 million in guaranteed money and the deal pays him $20 million per year in the first three years.

Just weeks after the 49ers reset the inside linebacker market with Fred Warner, the Colts have now done the same with this huge deal for Leonard.