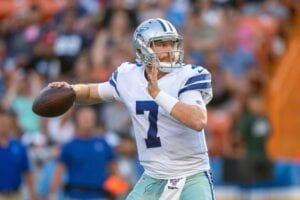 The team is also elevating QB Will Grier and C Alec Lindstrom from the practice squad ahead of Week 2.

Rush, 28, went undrafted out of Central Michigan back in 2017. He later signed a three-year, $1.66 million contract with the Cowboys and managed to make the 53-man roster all three seasons.

Rush signed his $2.1 million restricted free agent offer after being tendered by the Cowboys in 2020. He was later waived and claimed by the Giants, but returned to the Cowboys not long after.

In 2021, Rush appeared in five games for the Cowboys and completed 63.8 percent of his passes for 422 yards, three touchdowns and an interception.