According to Aaron Wilson, the Eagles brought in free agent G John Miller and OL Tyrese Robinson for tryouts on Wednesday. 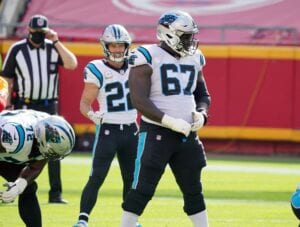 Miller, 29, is a former third-round pick of the Bills back in 2015. He played out the final year of his four-year rookie contract and signed a three-year $16.5 million deal with the Bengals in 2019.

However, the Bengals released him after just one season and he quickly signed with the Panthers on a one-year, $4 million deal. He re-signed with Carolina for the 2021 season.

In 2021, Miller appeared in 10 games for the Panthers, making 10 starts for them at guard.