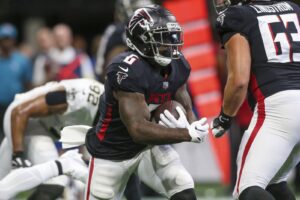 Williams, 30, originally signed on with the Dolphins as an undrafted free agent out of Oklahoma back in 2014. He finished out the final year of a three-year, $1,535,000 rookie contract before the Dolphins used an original-round restricted tender on him worth $1.797 million for the 2017 season.

The Chiefs signed Williams to a one-year, $1.5 million contract in 2018. He was set to be an unrestricted free agent in 2019 before signing a two-year, $8.1 million extension.

Kansas City picked up Williams’ 2020 option. However, the Chiefs opted to release him and he signed on with the Bears soon after. The Falcons signed Williams to a contract this past March.

In 2022, Williams has appeared in one game for the Falcons and rushed for two yards on two carries and no touchdowns.