Jordan Schultz is reporting that the Giants are “preparing for the worst” regarding the injury suffered by WR Sterling Shepard during Monday’s loss to the Giants. 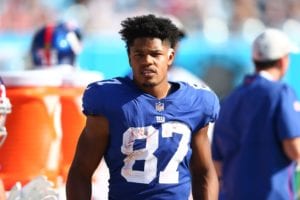 Schultz adds that the Giants fear this could be a season-ending scenario for Shepard, but more tests are scheduled for Tuesday.

Based on video of the play, Sports Injury Central has “significant worry” that this is an ACL tear for Shepard.

Shepard, 29, is a former second-round pick of the Giants back in 2016. He was entering the final year of his four-year, $5.944 million rookie contract when he agreed to a four-year, $41 million extension that includes $21.3 million guaranteed.

Shepard was set to make base salaries of $8.475 and $9.475 million in the final two years of his deal, however the two sides agreed to a reworked deal that makes him a free agent in 2023.

In 2022, Shepard has appeared in three games for the Giants and caught 13 passes for 154 yards receiving and one touchdown.

We’ll have more regarding Shepard as the news is available.