According to Ian Rapoport, Jaguars TE Dan Arnold suffered a sprained MCL in Week 12 and is facing a recovery timeline of about four to six weeks. 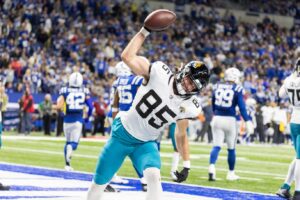 That likely means Arnold is going to injured reserve, and with just six weeks left in the season, Rapoport notes he might not be able to return to play in 2021.

Arnold, 26, signed on with the Saints as an undrafted free agent out of Wisconsin-Platteville back in 2017. Unfortunately, New Orleans waived him with an injury designation soon after before cutting him loose with an injury settlement.

Arnold returned to New Orleans for the 2018 season and was on and off of their active roster before eventually being claimed by the Cardinals in 2019.

Arnold was an unrestricted free agent this offseason when he signed a two-year, $6 million deal with the Panthers. Carolina traded him to the Jaguars midseason.

In 2021, Arnold has played in 11 games for Carolina and Jacksonville, recording 35 catches for 408 yards.