Adam Schefter reports that veteran linebacker Kwon Alexander is signing a one-year deal with the New York Jets on Thursday. 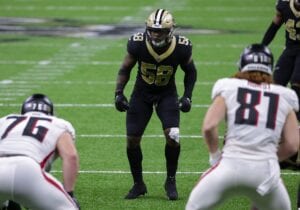 Alexander played for Jets HC Robert Saleh while they were together in San Francisco.

Alexander previously met with the Jets back in April.

He was traded to the Saints midseason in 2020 for LB Kiko Alonso and a conditional fifth-round pick. He tore his Achilles late in the season and was released back in March. However, he re-signed with the Saints in August on a one-year deal.

In 2021, Alexander appeared in 12 games for the Saints, recording 50 total tackles, seven tackles for loss, 3.5 sacks, one forced fumble, one recovery, one interception and two pass deflections.