Cowboys RG Zack Martin said lining up at right tackle last season was under necessary circumstances and is focused on playing right guard.

“I think that was different circumstances last year,” Martin said, via the team’s official site. “I play right guard and that’s what I’m going to do.”

Cowboys’ owner Jerry Jones said on 105.3 The Fan that Terence Steele will play at right tackle in Week 2 and that moving Martin around is a complicated matter.

“You talk about position flex in the offensive line, but when you make a move [like moving Martin to tackle], you’re dealing with two people at different positions rather than just one new one in there,” said Jones.

Regarding Jones’ declaration that Martin will fill in at right tackle, Cowboys HC Mike McCarthy responded that

“I’ll just say this about the right tackle, we’ll work all the combinations we’ve been working to this point. I mean, the obvious is L.C. [Collins] will not be there. We’ll sort it out at the end of the week,” said McCarthy.

As for Steele appearing as a rookie last season, McCarthy believes the second-year pro made big improvements and got “a lot stronger” over the offseason.

“I would say he improved in every area,” McCarthy said. “Coming off his experience last year, he just really needed to and committed to the weight room. So he’s a lot stronger. He does everything the same way every day. I just came from the training room before I came in here, and Zack Martin comes in there and gets taped at the same time every day. Terence Steele comes right after him, same time every day. I was just talking to the trainers about it because they’re always in tune with the veterans helping the rookies. I made the point to them, ‘If I was a young offensive lineman, I’d follow Zack Martin around all day, too.’ So that’s the kind of guy Terence Steele is.”

“I thought he did a really nice job. Obviously, in the two-minute situation, he did some really good things. He had some good pickups. But you saw he ran with some good toughness, right? He saw the holes, and he hit it. That touchdown there when we went fast on the ball, he hit it right there, is a great job by [C Jason] Kelce and [G] Isaac [Seumalo] on the double-team and he just knifed it there. You saw the explosiveness from him. It was really good to see him on Sunday and we got to continue to build off that,” said Steichen, via EaglesWire.

Giants S Jabrill Peppers admit that he’s adjusting to his reduced role in Week 1 after appearing in just 30 of 66 snaps.

“It’s different,” Peppers said, via Ryan Dunleavy of the New York Post. “It’s just the game plan right now. Whatever the coaches think is best for that week, that’s what it’s going to be.”

Peppers feels he had a bad performance in Week 1 after allowing two converter third-downs and a reception in the red zone.

“When my number is called, do a better job than I did last week,” Peppers said. “I’ve got to play better press technique. I gave up two big third downs. I gave up a catch in the red zone. Those are routes that I usually cover in my sleep.” 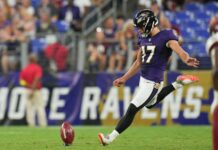