“I think really just any position back home,” Wishnowsky said, via Jennifer Lee Chan of NBC Sports. “It’s a free-flowing game. Sometimes you get the ball when you have to get out of a sticky situation and stuff. So, I think just the experience of just playing that, sort of might give me an upper hand if the fake is called to be able to run at least.”

Washnowsky believes he has “good leg strength” and is able to punt “outside the numbers” if needed.

“I feel like I’ve got good leg strength and then accuracy,” Wishnowsky said. “I feel like I’m consistent — putting it outside the numbers if need be, and sky-high punts or short yardage punts.” 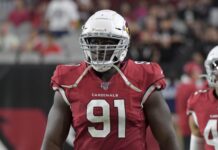