Bruce Feldman of the Athletic reports that multiple sources inside Michigan football believe Jim Harbaugh would accept the Raiders head coach position if the team offered it to him. 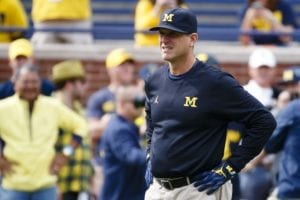 According to Feldman, Harbaugh’s prior relationship with Raiders owner Mark Davis and desire to coach in the NFL again will both play a role.

Feldman adds that his sources know that Harbaugh can be hard to read and their hunches could be wrong here. However, Feldman says they also know he’s never coached anywhere longer than four years prior to the seven years he has spent as Michigan’s head coach and he would like to return to the NFL in possible.

Earlier in the day, Vic Tafur reported out that all the sources connecting Harbaugh to the Raiders are coming from outside Las Vegas, although it doesn’t behoove the team to tip their hand in a coaching search and they are still looking for a new GM.

Tafur talked to someone close to Michigan who thinks Harbaugh could be trying to leverage a new deal after being forced into a pay cut last year. Another NFL source called the rumors linking him to Las Vegas “noise.”

Reports have said that the Raiders would like to land a “big fish” as their next head coach and they have already fired GM Mike Mayock, which further opens the door to this possibility.

Harbaugh, 58, was a first-round pick out of Michigan by the Bears in 1987. He played 14 years in the league before becoming a coach, first with the Raiders. He was hired by San Diego as head coach in 2004 and took the same position with Stanford in 2007.

The 49ers hired Harbaugh as their head coach in 2007. He was fired in 2014 and hired as head coach at Michigan.

We’ll have more on Harbaugh as the news is available.