New Orleans Saints GM Mickey Loomis mentioned during a radio interview that will apply their franchise tag to TE Jimmy Graham if they are unable to work out a long-term deal in the coming weeks, via WWL-TV.

It’s hardly shocking to hear that the Saints: A) intend to franchise Graham if they can’t get him locked up before the deadline to apply the tag, B) intend to pay him as a tight end.

We’ve previously mentioned that the Saints could be in for a battle if they elect to tag Graham as a tight end given the number of times that he’s lined up as a receiver in the past few years.

The franchise tag for receivers last year $10.54 million while the figure for tight ends came in at $6.07 million or a difference of $4.5 million roughly.

The Saints cap issues further complicate the situation as they are projected to be over the by close to $17 million next season. Veterans like DE Will Smith, WR Lance Moore, CB Jabari Greer and RB Mark Ingram have all been mentioned as possible release candidates.

New Orleans would obviously like to get Graham locked up long-term for multiple reasons. One, they wouldn’t be in the same position next year, but needing to pay Graham a 20 percent raise to franchise him again. Two, a long-term agreement would allow them to manage his cap numbers instead of paying him a guaranteed salary over $6 million.

We have Graham listed as the No. 1 player in our Top 50 Free Agents list. 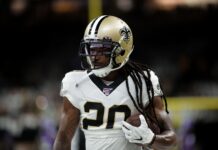 182,998FansLike
7,623FollowersFollow
269,180FollowersFollow
© NFLTradeRumors.co is an independent news source and has no affiliation with the National Football League (NFL), NFL.com, or any team(s).
wpDiscuz