Jody Allen, the Chair of the Portland Trail Blazers and Seattle Seahawks, Trustee of the Paul G. Allen Trust, issued a statement Tuesday explaining that neither of the teams is for sale right now and it could take years for this to happen.

There has been some recent reporting and speculation that a sale of either franchise could be coming in the next year or so.

However, Allen explains that the process could take as long as 10-20 years.

Bob Condotta of the Seattle Times reports that the Seahawks can’t be sold until May, 2024 without giving back 10 percent to the public stadium authority.

The Denver Broncos recently sold for a record $4.65 billion, so it would make sense that the Seahawks will eventually top this figure once the process officially gets under way. 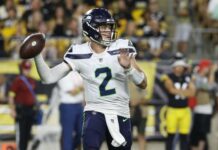