Corbin Smith of SI.com reports that the Seahawks have opened extension talks with S Quandre Diggs in the hopes of re-signing him this offseason. 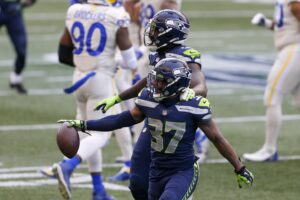 According to Smith, there are no details on the length of the deal or compensation at this time and a deal is not considered imminent.

Smith adds that the Seahawks are looking to keep their secondary that includes Diggs, CB D.J. Reed and possibly CB Sidney Jones intact.

It’s worth mentioning that Diggs suffered a very serious leg injury that consisted of a dislocated ankle and a broken fibula in Week 18.

Diggs, 29, is a former sixth-round pick of the Lions back in 2015. He was entering the final year of his four-year, $2.395 million contract and in line to be an unrestricted free agent when he signed a three-year, $20.4 million extension in 2018.

The Lions traded Diggs midseason in 2019, however, to the Seahawks, swapping a seventh for a fifth-round pick in 2021. Seattle reworked Diggs’ contract in September, giving the defensive back more injury protection as well as adding a voidable year in 2022.

Diggs will be an unrestricted free agent next month.

In 2021, Diggs appeared in 16 games for the Seahawks, picking up 91 total tackles, and five interceptions to go with seven passes defended.