The Pittsburgh Steelers announced Saturday that they’ve elevated DE Taco Charlton to their active roster for Sunday’s game against the Cleveland Browns. 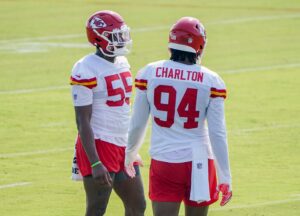 Pittsburgh downgraded OLB Melvin Ingram to out for Week 8’s game so they could use some depth at the position.

Kansas City released Taco Charlton coming out of the preseason and he later signed on to the Steelers’ practice squad.