According to Field Yates, Steelers S Damontae Kazee has been suspended for the next three games after violating the NFL’s substance abuse policy. 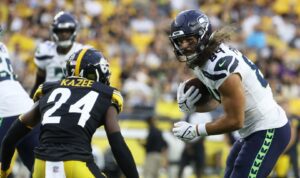 Kazee played out the final year of his rookie contract and was set to visit with the Lions before deciding to sign with Dallas.

The Steelers signed Kazee to a one-year deal this past April.

In 2021, Kazee appeared in all 17 games for the Cowboys and recorded 52 total tackles, two interceptions, two forced fumbles and four pass deflections.