Tom Pelissero reports that the Steelers are signing OLB Ryan Anderson to their practice squad in the wake of the injury to OLB T.J. Watt. 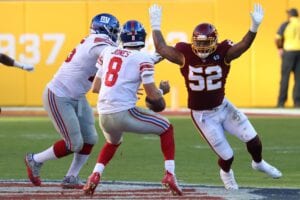 Anderson, 28, was drafted by Washington in the second round out of Alabama in 2017. He signed a four-year, $5.32 million deal that included a $2.01 million signing bonus.

Anderson made a base salary of $1.19 million in 2020 before agreeing to a one-year contract with the Giants. However, he was suspended for six games for violating the league’s substance abuse policy and never played for the team.

In 2020, Anderson appeared in nine games for Washington and recorded nine tackles and no sacks.