According to Ian Rapoport, sources with the team say Washington QB Taylor Heinicke has a very real chance to keep the starting job depending on how the next several weeks go. 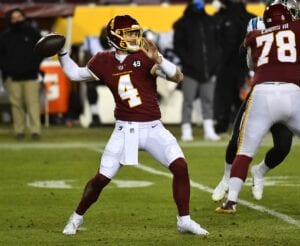 Heinicke was bumped up to the starting role after veteran QB Ryan Fitzpatrick went down with a hip injury in Week 1. If he continues to play well, Rapoport says he might not give the job back when Fitzpatrick returns from injured reserve.

Heinicke was steady in the second half of Week 1 and led Washington to a comeback win in Week 2 against the Giants.

Rapoport adds Washington has been impressed with how the team has rallied around Heinicke as a leader, and that will be a factor in the decision later this season.

In 2021, Heinicke has appeared in two games for Washington and completed 45-61 of his passing attempts (73.5 percent) for 458 yards, three touchdowns and one interception. He’s added seven rush attempts for 23 yards.