Adam Schefter reports that tests have confirmed that Ravens CB Marcus Peters did, in fact, suffer a torn ACL and is out for the entire 2021 season. 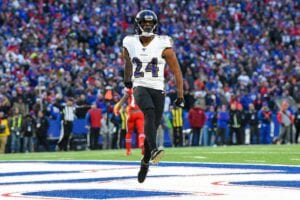 You can expect the Ravens to place Peters on injured reserve in the coming days and add someone to their roster.

Ravens RB Gus Edwards is also feared to have suffered a torn ACL Thursday, but they are still awaiting tests on his knee.

Baltimore has also lost RBs J.K. Dobbins and Justice Hill for the season in recent weeks.

Peters was entering the final year of his four-year, $9.584 million contract when the Rams picked up his fifth-year option. From there, Los Angeles elected to trade Peters to the Ravens for Kenny Young and a 2020 fifth-round pick.

Peters was in line to be an unrestricted free agent in 2020 when he agreed to a three-year, $42 million extension that included $32 million guaranteed in 2019.