Anderson is scheduled to be arraigned on Wednesday.

According to TMZ Sports, Texans RB Darius Anderson has been arrested and charged with burglary with intent to rape. 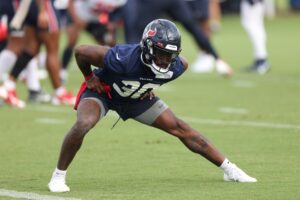 Per Harris County court records, Anderson was booked with the charges on July 15. No further details are available from the police at this time.

The Texans released the following statement:

“We are gathering information and have no further comment at this time.”

Anderson, 24, signed with the Cowboys as an undrafted free agent out of TCU in 2020. He was waived by Dallas coming out of training camp, however.