According to Field Yates, the Houston Texans will have a second interview with Giants OC Mike Kafka for their head coaching job. 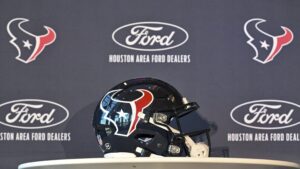 Kafka interviewed virtually with the Texans this weekend. Now that the Giants have been eliminated, he can meet in person with the team, which Yates says is scheduled to happen Wednesday.

Here’s where the Texans’ coaching search stands so far:

Kafka, 35, is a former fourth-round pick of the Eagles back in 2010. He played for a number of teams including the Patriots, Jaguars, Buccaneers, Vikings, Titans, and most recently for the Bengals back in 2015.

Kafka worked for Northwestern as an offensive graduate assistant in 2016 before agreeing to take over as the Chiefs’ offensive quality control coach in 2017. Kansas City promoted him to QB coach in 2018 before promoting him to QB coach/passing game coordinator in 2020.

He later landed the job as the Giants offensive coordinator back in February of 2022 and helped the team to the playoffs as they ranked 15th in points per game and 18th in yards per game.