According to Aaron Wilson, the Texans brought in four players for workouts on Thursday including CB Ken Webster and DT Eli Ankou. 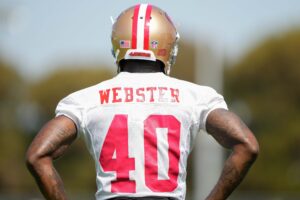 Webster, 25, was drafted by the Patriots in the seventh round out of Ole Miss in 2019. He signed a four-year, $2.6 million rookie deal but was waived by New England coming out of the preseason.

The Dolphins claimed Webster off waivers from the Patriots before waiving him coming out of camp last year. He eventually signed on to the 49ers’ practice squad and returned to San Francisco this past January but was cut loose last month.

In 2020, Webster appeared in nine games for the 49ers and recorded five tackles, no interceptions, and a forced fumble.

Earlier in the offseason, Ankou signed with the Falcons but he lasted just a few months in Atlanta and later had a brief stint with the Bills. The Falcons re-signed him last month but was among their final roster cuts.