Aaron Wilson reports that the Packers are trading CB Ka’Dar Hollman to the Texans on Monday. 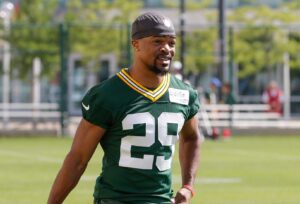 The Packers will receive a 2022 seventh-round pick from the Texans for Hollman.

Hollman wasn’t seen at practice on Monday and his absence was not injury related so it appeared as though he was involved in a roster move.

In 2020, Hollman appeared in 14 games for the Packers and recorded eight tackles, no interceptions and three pass deflections.