According to Stephen Holder, former Colts WR T.Y. Hilton has had fruitful conversations this offseason with at least two other teams and has legitimate interest in his services. 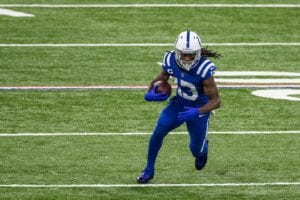 Holder adds Hilton has also stayed in contact with the Colts and a return for another season in 2022 is not out of the question.

However, both sides are remaining patient as the Colts evaluate their young additions at receiver to see if there’s room to bring Hilton back.

While Hilton has said he plans to play in 2022, Holder notes it could depend on the money and opportunities he gets.

Hilton was testing the open market as an unrestricted free agent in 2021 when he re-signed with the Colts on a one-year deal worth up to $10 million.

He was placed on injured reserve due to an upper back/neck injury coming out of the preseason, but was able to return later in the season.

In 2021, Hilton appeared in nine games for the Colts and caught 23 of 37 targets for 331 yards receiving and three touchdowns.