Jaguars HC Urban Meyer shot down the rumors that he is considering leaving the NFL to take the open head coaching job at USC. 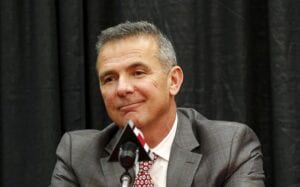 “There’s no chance. I’m here and committed to building the organization,” he said via Andrew Groover.

However, it appears Meyer is committed to sticking things out with the Jaguars for at least a little bit longer, although the start to his tenure has been rocky, to say the least.