Dolphins HC Brian Flores told reporters that WR Will Fuller likely won’t make it back to play this season, per Joe Schad. 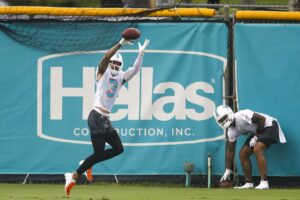 Flores said Fuller has had some setbacks while rehabbing a broken finger. He’s been out since Week 4.

Between a suspension to start the year, a personal issue that caused him to miss another week and this injury, it’s been a rough tenure in Miami for Fuller, who is on an expiring contract.

In 2021, Fuller appeared in two games for the Dolphins, catching four passes for 26 yards on eight targets.