According to Aaron Wilson, multiple teams are currently monitoring veteran WR Will Fuller, who remains available as a free agent. 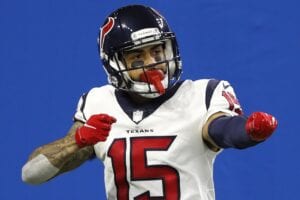 Wilson adds Fuller isn’t expected to sign anywhere until later in the preseason, however.

His market has been remarkably quiet this offseason following the conclusion of his one-year deal with the Dolphins in 2021. Fuller apparently suffered a significant finger injury that derailed his time in Miami and may have impacted his market this offseason.

He is good friends with Browns QB Deshaun Watson and the two sides were linked back in March. Nothing has come of that since then, though, and Cleveland appears pretty set at receiver.

Fuller was testing the open market as an unrestricted free agent last offseason when he signed a one-year contract with the Dolphins.

In 2021, Fuller appeared in two games for the Dolphins, catching four passes for 26 yards on eight targets.