Falcons CEO Rich McKay told the media that the new GM and head coach in Atlanta will have “great control over the roster.”

“We like a lot of the players we have on this football team,” McKay said, via Pro Football Talk. “You never try to tie their hands. You’ve got to give your people that you brought in to run your franchise. You’ve got to give them the leeway to do what they think is best.”

McKay also said that he realizes the salary cap is somewhat problematic but dismissed it as “not a big huge problem.”

“We have constraints based on the current roster set up,” said McKay. “And that’s because we have some players that are really good players, and they’re paid at an elite level. We should be a very appealing job.” 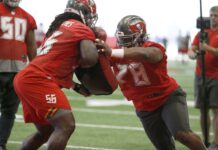 186,384FansLike
7,623FollowersFollow
275,701FollowersFollow
© NFLTradeRumors.co is an independent news source and has no affiliation with the National Football League (NFL), NFL.com, or any team(s).
wpDiscuz