Panthers HC Matt Rhule‘s affinity for former players is no secret. Former Jets WR Robby Anderson is just one of several guys Rhule brought to Carolina that he used to coach. To replace Anderson, the Jets got another of Rhule’s former players in ex-Baylor WR Denzel Mims. The first-year head coach says the Jets will love Mims just as much as he does.

Rhule touted Mims’ work ethic and his potential as the receiver’s best attributes. While the rookie fell to the end of the second round, Rhule thinks the Jets got a steal.

“His best football is still ahead of him and the greatest thing about him is he’s a guy that wants to learn,” Rhule said. “He’s not one of those guys who thinks he has it all figured out. He wants to get better. He wants to improve. He’s driven to be good. Learning how to play receiver, learning all the intricacies of route running, getting off bump-and-run, working the top of routes, he’s developed in those areas. When you get to the NFL and you face the best of the best you make a really big jump. That’s what all of the players I’ve had have done. I think Denzel will make yet another big jump this year.” 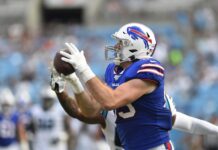 Bills TE Tommy Sweeney Out For Season With Myocarditis

187,540FansLike
7,623FollowersFollow
275,829FollowersFollow
© NFLTradeRumors.co is an independent news source and has no affiliation with the National Football League (NFL), NFL.com, or any team(s).
wpDiscuz