Chiefs CB Alex Brown announced via his Instagram account on Saturday that he suffered a torn ACL.

Nate Taylor has confirmed that Brown does, in fact, have a torn ACL and will be out for the season.

Raiders OC Greg Olson said his experience with QB Derek Carr is a “significant advantage” for the 2020 season.

“Knowing the terminology and [Carr] being able to gather some of the guys … that was the benefit of having a quarterback familiar with your system coming back,” said Olson, via Paul Gutierrez of ESPN.

Olson said he wants Carr to create more plays with his legs or when the original call breaks down.

“Can he be more creative and be the play after the playcall?”, said Olson. “That’s been an emphasis. He sees it; he’s athletic enough that he can create with his legs, so we are just working on him to create more outside the pocket.”

Ruggs said Carr has been leading the younger players in their offense and has been building chemistry with them.

“I love him,” Ruggs said. “He’s a guy that’s not afraid to call … he’ll come and see if we have a question before we can even think twice. So, he’s making sure that guys are on top of everything. If we want to come in early, he’s open to doing that. If we want to go to the house and try to do something extra, he’s open to doing that. So, he’s a great leader, a great team guy and definitely is somebody that I can lean on for anything.”

“He’s interesting,” Gruden said, via ESPN.com. “He took off a couple times today and it really fired me up. He’s been hurt, but looks like the ankle really turned a corner. He’s a dazzling playmaker with his feet, and that’s the key to his game. 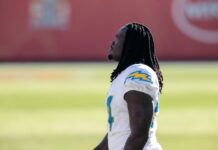